I’m embarrassed to actually ask this, but what is the difference between boiling and simmering? A lot of your recipes say bring to a boil and reduce the heat to a simmer. What does that mean and why does it matter? 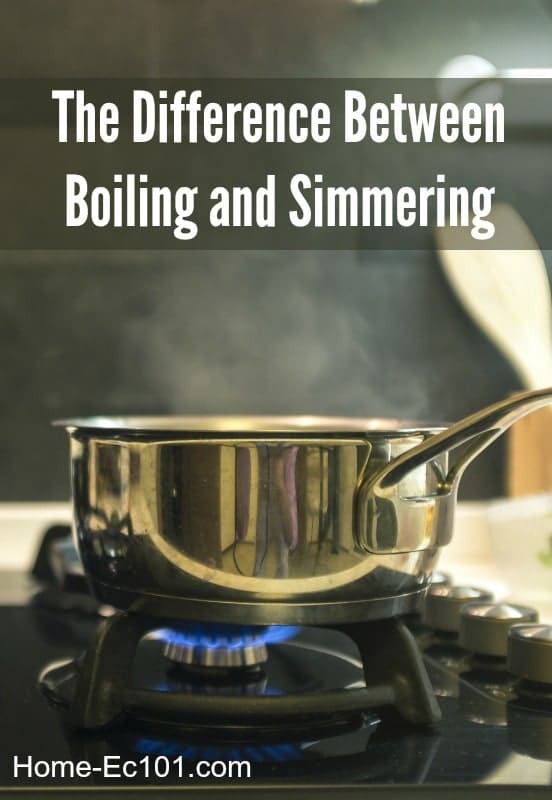 Basic questions like this are encouraged here. If you’re asking, I guarantee there are plenty of other people out there who don’t know either.

Do you remember high school chemistry and surface tension? Water molecules have an attraction to one another caused by the polar nature of each molecule. If you were able to see an individual water molecule it would have a bent shape, something like a V.  The point of the V is the oxygen molecule which hogs the electrons and the arms of the V would be the slightly positive hydrogen atoms. As you may remember opposites attract, the hydrogen atoms of one molecule are attracted to the negative oxygen atom of another and this creates the phenomenon of surface tension. All this means is that water molecules like to stick together and it takes energy to break them apart.

That energy is heat. At sea level water boils at 212°F, it’s a very convenient and observable benchmark when it comes to cooking. When water reaches its boiling point, which slowly drops with altitude the bubbles break the surface. Once the boiling point is reached, even if you turn up the burner, the liquid will not increase in temperature. It may boil more vigorously as more liquid turns to gas, but it won’t get any hotter.

Here’s a handy reference for those of you who don’t live at sea level:

Most of the time recipes will call for a liquid to be brought to a boil first, this is to compensate for the drop in temperature when food is added to the cooking liquid.

The boiling point is too hot for cooking many foods. Turn the burner down.

There are exceptions for starches and vegetables.

Simmering is the stage before the bubbles have enough energy to break the surface tension and the temperature range is from 185°F – 205°F or 85°C – 96°C. Not only does simmering require less energy from your appliance, it also keeps many proteins from becoming tough. This is why soups and stews are simmered rather than boiled, additionally the vigorous bubbling action of boiling can break apart some items like fish.

Most of the time crock pots or slow cookers are designed to cook in the simmering range, but you should test out your appliance by filling it partway with water and allowing it to reach temperature at both the high and low settings before leaving an item unattended for an extended period of time.

Not all stoves or ranges make simmering easy, in fact simmering on some gas stoves can be quite difficult, it may be necessary to move the pot so it is not centered over the flame. Be careful to ensure the pot is still balanced and won’t tip easily.

Just to throw this out there, poaching* is another way to cook with hot water and it’s temperature is even lower than simmering and it covers the range 160°F – 180°F or 72°C – 82°C.  Poaching is often reserved for delicate items like eggs and fish.

Last tidbit, sometimes menus at restaurants will refer to meat as boiled. It’s not, it’s just an inaccurate description.

*Am I the only weirdo who can be merrily writing along and brought to a standstill by a word? Poach. It’s just fun to say, which is weird since roach is just nasty. Moving along*

Send your domestic questions, no matter how basic, to helpme@home-ec101.com.

16 thoughts on “The Difference Between Boiling and Simmering”