Oh, Home Eccers, help me solve my great marital debate. Ever since we moved to a house with a linen closet, we’ve been having this debate a few times a year. When we moved in, my husband filled the linen closet with things like sheets and blankets and comforters and tablecloths.

A few months later when I got irritated with the arrangement, I moved the comforters and blankets to the closets of the room the comforter and blankets would normally live in, and moved the towels back in. This led to what will eventually be known in my household as the Hundred Years War. We just can’t seem to get an agreement on this. 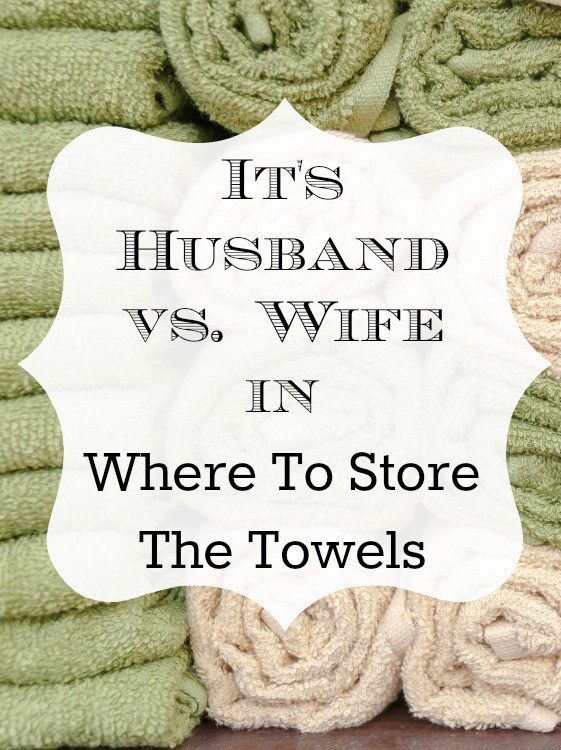 Here’s why I think the towels should go in the linen closet:

1. If the sink sprung a leak, the towels would absorb the water and we might not know right away. (yes, I know this is a fairly weak argument)

2. There’s not so much space under the sinks. It’s a better use of the under-sink space to store all the stuff that normally sits out on our bathroom counters.

3. Towels smell better when they’ve been living in the linen closet. I don’t know why, they just do. And is there anything better than a nice smelling towel right after you get out of the shower? I didn’t think so.

Now, here are Mr. Ivy’s reasons to store the towels under the sink:

1. You don’t have to remember to take a towel with you when you take a shower. If you forget your towel and you jump out of the shower, the towels are all right there in the bathroom. No dashing out to the linen closet, naked.

2. Most of the crap on the bathroom counters are mine and my daughter’s. If we don’t like looking at all that crap on the counters, we should consider owning less makeup and hair stuff. (As. If.)

3. If the sink did spring a leak, the towels would absorb the water before it damaged the cabinets. (eh. maybe.)

So, Home Eccers, what do you think? Help me solve the dumbest marital debate ever!

39 thoughts on “The Great Debate: Towels in a linen closet or under the sink?”