Dear Home-Ec 101:
This isn’t exactly a Home-Ec question but I figured you would know the answer. I have two cupholders in the front seat of my SUV. They are odd shaped, bigger than most normal sized cups, but too small to hold something the size of a Big Gulp for example. So when I buy a frappucino or a medium soda the cup will bounce around a little and often leaks. I’m bad about wiping up the spills quickly, so what has now happened is I have a nice sticky, stinky mess in the bottom of my cupholders. There’s also probably $3 in coins stuck in there too because I usually toss my drive-thru change in the ‘empty’ cupholder. What is the best way to clean this? In my old car I had removable cupholders so I just took them inside and gave them a rinse in the sink, but these do not come out. And the car wash people didn’t touch them either.
Signed,
Sticky Stephanie 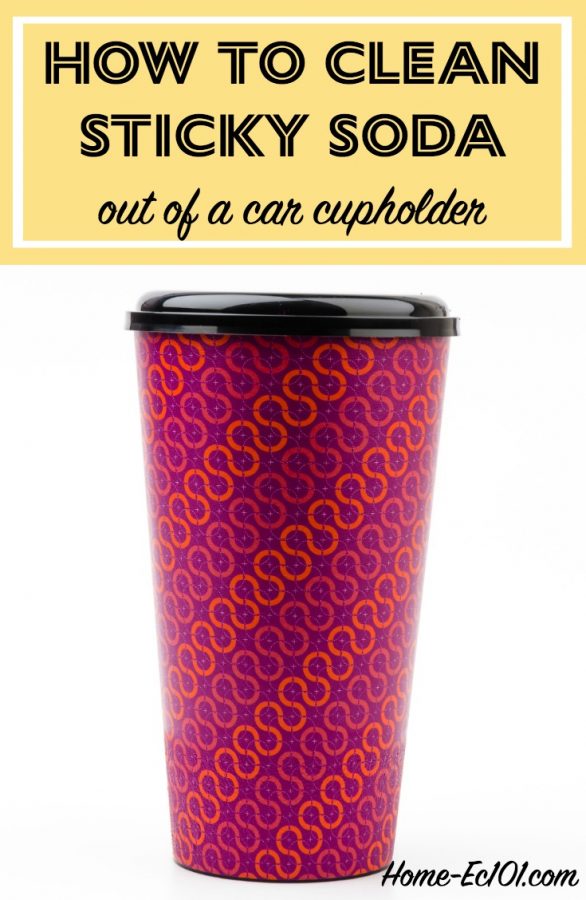 Cars, for commuters at least, are just a mobile extension of our homes, so I believe it fits perfectly under the Home Ec umbrella.

You’re right, wiping it up quickly would be the best way to avoid the problem, but I stink at that, too. What with driving, checking email, tweeting, eating. . . who has time to clean at a stoplight?

I kid. Put the lecture back in your pocket. Simmer down, simmer.

What has happened is all of the water has evaporated leaving behind a layer of dried milk solids and syrup united in an unholy bond. It’s going to take a little work to get it out.

Grab an old rag or some paper towels, an old toothbrush, and some Armor All. If the bottom of the cup holder isn’t vented go ahead and spray a little of the Armor All into it, don’t go crazy, you’re going to have to blot this all up. Also make sure your windows are all down or the doors are open. Get the toothbrush and scrub what you can, also the handle of the toothbrush can make a decent pry bar to loosen the coins. Stuff the rag or paper towels into the cup holder and wipe out the cleaner. This may take two or three repetitions, depending on how thick the layer of soda.

If you don’t have Armor All on hand, use very soapy water, but it’s going to take a bit of rinsing.

If this stuff isn’t coming loose, it may be time to step it up and get some Goo Gone. This is solvent can usually be found in the home improvement section of stores, usually in a section referred to as solvents. Ask a clerk, it’s not a big bottle and may be annoying to find.

Whatever you use, be sure to wipe out all of the residue, wipe the cup holder out with a soapy rag, and finally a damp one to remove all traces of the solvent.

Before grabbing your next soda, swing by the auto parts store, sometimes there are cup holder inserts that have tabs to hold drinks in place. If you can’t find one that fits, there are absorbent “car coasters” that may help prevent it from getting so gross in the future.

Problem solved! No more sticky soda residue in your car.

Here are some other car problems that we can help with:

Send your domestic quandaries to helpme@home-ec101.com.