A few weeks ago I mentioned that I would be trying to increase the amount and variety of fish we eat. This week I decided to try out steelhead trout. Looking at the picture, you may think to yourself, Heather has gone off her rocker (again) that looks just like salmon. There’s a reason for that, steelhead is an anadromous trout, it migrates from salt to fresh water to spawn. Unlike salmon it doesn’t die after spawning and can hightail it back to sea¹. And you thought you wouldn’t learn anything today.

With the two kinds of fish, salmon and steelhead trout being so similar any recipe for salmon can be used for this fish. I decided to go with a sweet, but garlicky glaze. 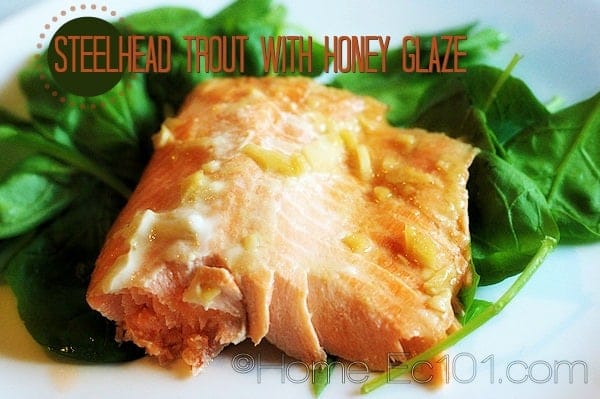 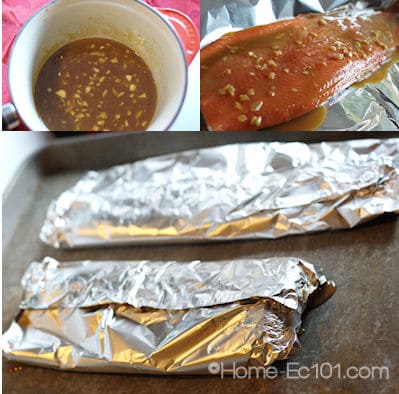 Melt the butter in a small sauce pan over low heat. Whisk in the ingredients.

Place the fish in the center of a rectangle of foil. Pour the glaze over the fish and fold the packet around the fish.

Preheat the oven to 400°F. (This essentially allows the fish to marinate). If you’re in a big hurry, start the oven before you make the glaze and just pop it in.

Bake for 10 minutes + 10 minutes for each inch of thickness. So, a one inch thick fillet would bake for twenty minutes. 1.5″ would be 25 minutes. Got it?

The recipe makes enough glaze for a little over two pounds of fish. It is easily halved or doubled.

This recipe could be done on the grill, but remember to not cook the fish over direct heat, unless you enjoy rubbery, dried out fish. On the grill it can be done in a foil packet as described or you may skip it. If you choose to grill, place it skin side up, first. Once the fish has cooked, it falls apart, the skin sort of holds it together, making transfer a little bit easier.

¹Fun with mixed metaphors. Hush, the coffee hasn’t worked its magic, yet.

25 thoughts on “Steelhead Trout Baked with Honey or Maple Glaze”