Lately, Home Ec 101 has been focusing on cooking basics, and in my opinion, Scalloped Potatoes are about as basic as it gets when it comes to side dishes. They go with practically anything, and with the right recipe, made-from-scratch scalloped potatoes are almost as easy as a boxed mix, so much better for you, and waaaay better tasting! And (lucky you) it just so happens I’ve got the right recipe.

While most scalloped potato recipes call for first making a white sauce, or using a can of condensed soup instead, this recipe is even better. Why? There is no white sauce to make and no canned soup with this Simple Scalloped Potatoes from Scratch Recipe. It makes its own sauce as it bakes! So, the hardest bit is peeling and slicing the potatoes, which you know isn’t really hard at all.

What variety to use? Some say only red. Other say definitely yellow. While I do like both of those varieties, I prefer white potatoes in this recipe. It’s up to you, really. My honest opinion, based completely in practicality, is this: use what you have. Or what’s on sale. Seriously, I’ve tried scalloped potatoes using different varieties, and they all end up delicious. Don’t fret.

You’ll see the recipe calls for onions. I prefer yellow, but use what you like — even scallions would work and give you a bit different flavor. If you’re tempted to omit onions because some family members are Not Onion People, please don’t. It’s really an essential part of the flavor here. Instead of sliced onions, though, you could use a smaller amount of finely minced onion. 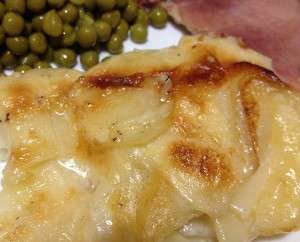 While I served these golden-browned, creamy scalloped potatoes with a pan-fried ham slice and peas, they’ll pair well with chicken (roasted or fried or even boneless breasts browned in butter), steak, roast beef, burgers, pork roast or chops, turkey — pretty much any non-pasta entree. And easy? Oh yeah, this one is a piece of cake. (Only, much easier than cake – for me anyway. I’m really not a baker.) Once they’re assembled and in the oven, little attention is required. They’ll bake while you work on the rest of the meal. Or read a book. Or, you know….write one.

Choose a 2-quart baking dish, preferably no more than 2 to 3 inches deep. If you’re not sure it’ll hold 2 quarts, try filling it with 8 cups of water. Seriously, if it won’t, you’ll be cleaning the oven after baking this dish. If it holds a bit more than 2 quarts, that’s probably even better. Make sure it’s big enough, then rub the inside with butter.

Start heating the milk — you can either microwave it or do it on the stovetop in a small pan. Do not boil it, just get it very hot. Once it’s hot, set it aside.

Wash the potatoes, scrubbing them if they’re very dirty. Peel them using a potato peeler or a sharp paring knife, and remove the eyes, if any.

Cut potatoes into slices between 1/8 and 1/4 inch. Don’t sweat it. If they’re around that thickness, more or less, you’re good. Make sure you’ve got about a quart, or 4 cups, of potato slices. 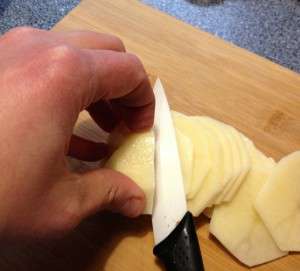 Now we’re going to “dot with butter.” Here’s how: take 1 tablespoon of the butter and cut it into a dozen or so small bits, then distribute those more or less evenly over the potato/onion/flour layer. 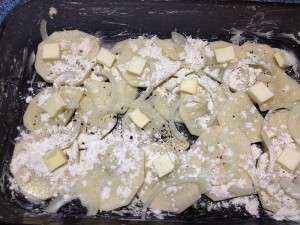 Now, do one more layer, same as the previous ones, except with no flour.

Pour the hot milk over the potatoes, then cover tightly with foil.

Place in preheated oven, being careful not to spill the liquid.

Bake 30 minutes. Remove foil and bake until potatoes are tender and the top is golden brown, about 45 minutes longer. If you chose a deeper casserole dish, it may take up to another 20 minutes.

Carefully remove from oven – the sauce will be on the thin side right now. Let stand about 10 minutes for sauce to thicken before serving. 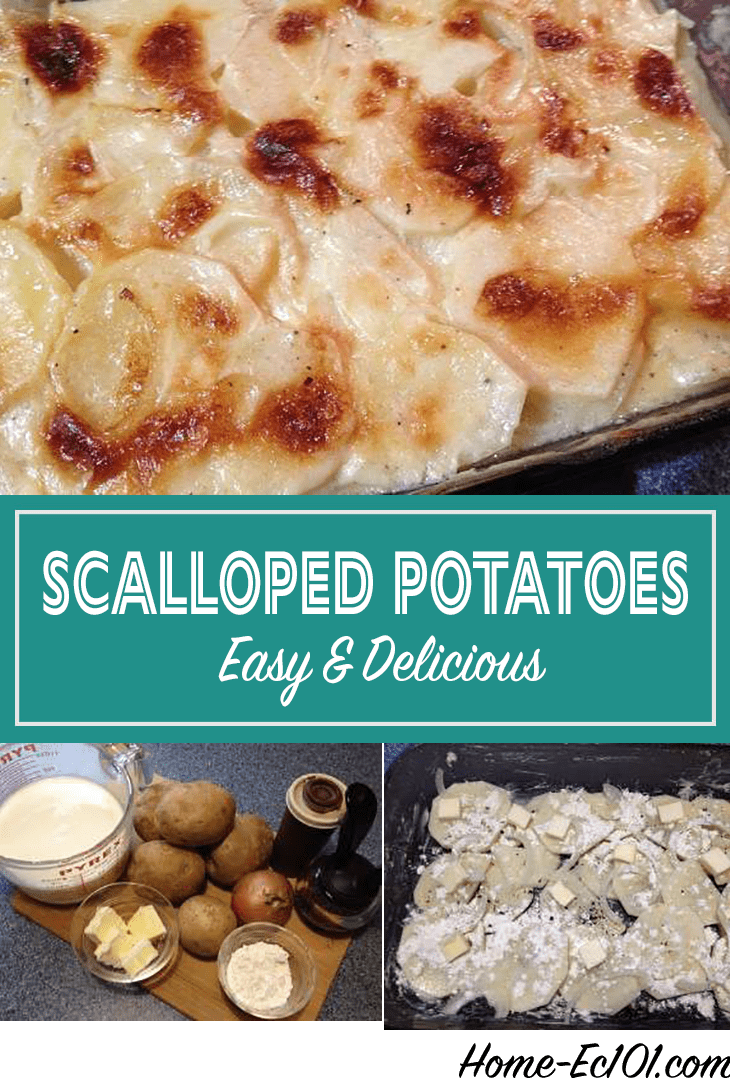 Bobbie Laughman is probably just a figment of her own imagination, but if you like figments, consider following her on Pinterest or check out her blog, Gruntled, Sheveled, Whelmed.