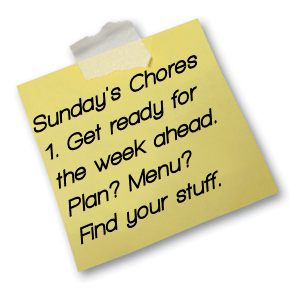 Another week another kitchen challenge. This week I experimented with making noodles from scratch. I’ve made rolled dumplings in the past, so I knew it couldn’t be too difficult, but I was prepared for a starchy mess.

Ready for the Fearless Friday Spiel?

Fearless Fridays are an exercise in kitchen bravery. It’s not about grossout games like Fear Factor, rather, Fearless Friday is trying to learn a new skill. It’s a time to stop making excuses and try to cook, even if it doesn’t turn out perfectly. It’s serving a vegetarian dish to your meat and potatoes family or taking a walk down the freezer aisle and deciding to try making one of those items on your own. For some, Fearless Friday is cooking a meal instead of eating out. We all have our starting point, the key to becoming successful is to keep going, knowing sometimes we will fail.

Did you try a new recipe or technique this week? Share a link to your blog in the MckLinky below or tell us in the comments. Take a moment and visit those participating. It’s encouraging to share in the experience. 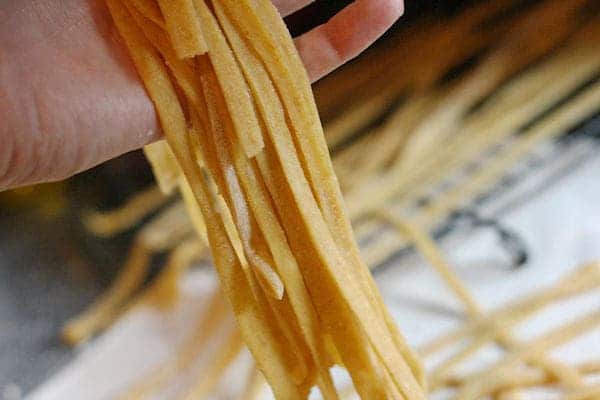 It won’t be long before someone whose traditional, Italian grandmother taught them how to make noodles chimes in and tells me I did it all wrong. I know this, There is a different (more traditional) technique that involves piling all the flour on the cutting board and mixing the eggs in a well. My goal for this tutorial is to explain the process in a manner even a very novice cook could attempt. I also live in a small town and Semolina flour requires a long drive I wasn’t going to make for an experiment. Ok, now that’ we’re on the same page, let’s get started. 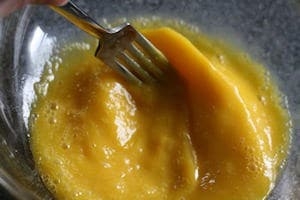 In a large bowl, beat the four eggs with the oil and salt. 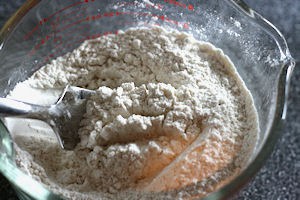 In another bowl whisk together the all purpose flour with the wheat flour. 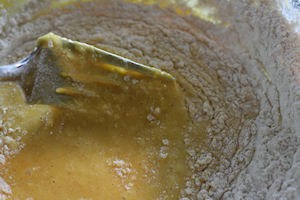 Using a fork to stir, slowly add one third of the flour mixture. Stir until there are no lumps, then hunt down a spoon.

Add another third of the flour mixture while stirring. The dough will be very sticky.

Slowly add flour from the final third of the dough until it has all come together and isn’t impossibly sticky. It was so humid in my area that I had to use all the flour. Drier climates and seasons may require less flour. Don’t underestimate the weather when it comes to some recipes.

Turn the dough out onto a lightly floured work surface and knead for about five minutes. Much like bread dough, you want to knead enough to encourage the gluten (basically flour glue) but not so long that the proteins from the wheat break down.

Shape the dough into a ball and wrap in plastic. Allow it to rest for 15 – 30 minutes. If you’re bored, click through the McKlinky above and see what other Home Eccers have been up to.

Roll the dough out using a rolling pin. Turn the dough (or I highly recommend the pastry mat,  for less than $10) about an 1/8th of a turn after each roll to try to keep the thickness of the dough as even as possible. 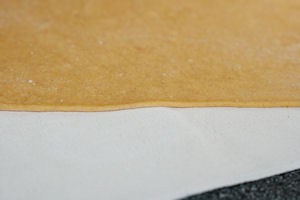 Roll the dough out until it’s about 1/8th of an inch thick. Don’t break out the ruler, eyeball it. Think about boxed fettuccine, as that’s the general idea of what we’re going for.

Let the dough hang out for at least then minutes. A little longer if the air is so humid that it’s hard to breathe (what, like you’ve never complained about the weather before?)

Grab the bottom of the sheet of dough. Fold it about 1/4 of the way toward the top. Grab the bottom and fold it up again, repeat until you reach the top. It’s kind of like rolling up the dough, but it’s flat folds. 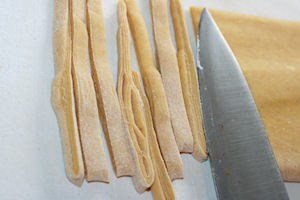 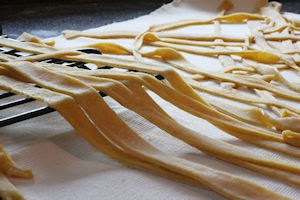 Unroll the strips and drape over whatever is handy. If this is your first time making pasta, I bet you don’t have a past drying rack, either. I used one of my grill accessories as it happened to be nearby. Whatever floats your boat.

Let the noodles hang out and dry for a while. Some tutorials said ten minutes, some said three hours. My noodles hung out somewhere around 30 – 45 minutes. 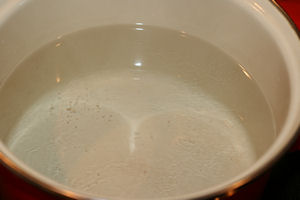 Now, bring a pot of salted water to a boil. 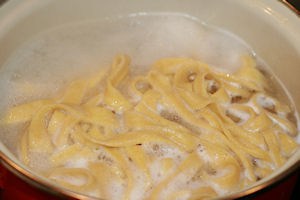 Drop your noodles in and check after 3 minutes. Fresh noodles don’t have to boil anywhere near as long as dried pasta. Don’t forget about them or you will have a pot of starchy mush, not the best way to end a culinary adventure.

Drain and toss with your favorite sauce.

In our case, we had alfredo with beef stewed in a wine gravy. All I can really say is NOM! 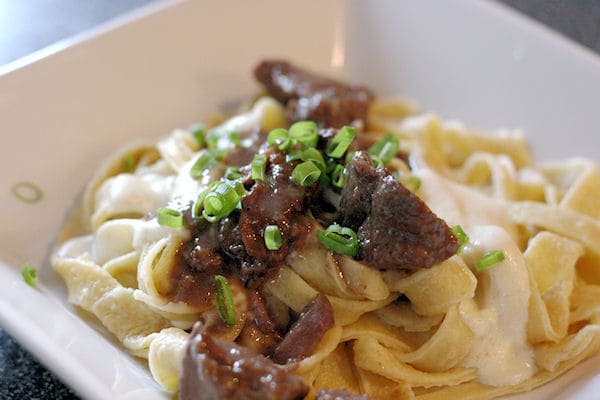 Added to the Food on Friday Meme.