I love my car-unlocker button thingy.

Car Remote. Keyless entry. Key fob. That plastic bit with buttons on, that hangs off your key ring and unlocks the car for you miraculously while you’re still walking to it with your arms so full of shopping and children that you can’t possibly manage keys, but you can certainly push a button to open the stupid door. Whatever you call that thingy.

I did some research to find out what everyone calls it, so I could connect with my audience.  And by research, I mean a brief and thoroughly unhelpful survey on Facebook.  It was an attempt at Scientifically Gathering Data, without actually being, you know….scientific*. I wanted to find out what to call this doo-dad so people know what the heck I’m talking about. Because, I call them The Buttons. Not even kidding. And I love The Buttons.

Well, I did love The Buttons, that is, until The Son Who Shall Remain Nameless (TSWSRN) managed to break it off the keyring.

TSWSRN has a crazy key ring with a house key, a key to my husband’s pickup and one for the 1999 Explorer that TSWSRN and I share. Three keys and an irrational number of non-key items.

When TSWSRN drives the Explorer, he takes my sensible key ring, which has the mailbox key (so he can get the mail) and The Buttons, because if you want to  open the hatch, you need them. If you accidentally set off the Very Sensitive Alarm (which is especially easy to do if you use an actual key to open it) you need The Buttons so you can turn the wretched thing off. ** The car remote is absolutely essential to the sane operation of the thing, so I wasn’t about to just stick it in a pocket once the key ring loop broke off. Much too easy for me or The Son Who Shall Still Remain Nameless to lose.

He then attaches my sensible key ring to his crazy one with a carabiner clip, resulting in this twisted monstrosity. And the breaking off of the key fob.

So, I decided to channel my inner MacGyver and see if I could fix it with toothpicks and chewing gum wrappers, or other odds and ends we had lying about. It’s amazing what one can come up with in a pinch.

After nixing rubber bands and paper clips and duct tape, I came up with cable ties.

They’re also called zip ties, wire ties or tie-wraps. They’re mostly used to bundle wires together tightly and permanently, but they’re sometimes used as handcuffs in law enforcement. We happen to have a lot of them around here, because of my husband’s computer/technology business, but you can buy them in smaller quantities in a hardware or electronics department, or at a home improvement store.

I looked at my remote and decided I needed to use two cable ties. A larger one around the upper part, just above the buttons, and a smaller one to make a loop to connect to the key ring. Car remotes vary widely in design, so your placement may be different. Just figure out where you can get a secure hold without covering any of the buttons.

You’ll need pliers and a way to cut the ends off the ties when you’re done. I found needle nose pliers to work best for me. Mine have a built-in side cutter. If you don’t have side cutters, a sturdy pair of scissors can be used, but be very careful. 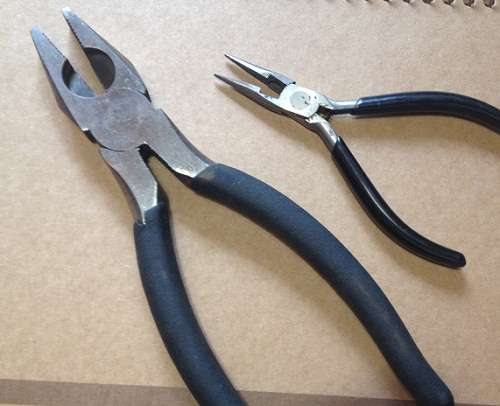 I made a loop from the larger cable tie, put it around the upper part of the remote, then pulled the cable tie just until it stayed in place.

Slipped the smaller tie under the large one on the back side, fastened it into a loose loop.

Using the pliers, pulled the loose tail on the cable around the remote, and made it as tight as I could. I used the needle nose pliers and grabbed it right next to the slot and twisted, leveraging it to get it tight enough that it won’t slip off.

Adjusted the hanging loop to an appropriate size, then cut the tail off both ties.

Ready to roll. I did this a few months ago, and it’s held up extremely well. I could probably buy a replacement for more money than I want to spend, but seriously – the new remote would probably outlast the vehicle, so why bother?

*Survey results: Although a lot of people call them Key Fobs, most people don’t call them anything. All these poor car-button-thingies being ignored and taken for granted. No wonder they break off — they’re trying to run away from home.

**We bought it second- or third- or quite possibly seventeenth-hand. It has its foibles, but it’s at least it’s not possessed by an Electrical Demon like its predecessor. That was like being in a Stephen King movie, but with less dying.

You can stalk Bobbie Laughman on Pinterest, or go see if she’s up to anything at Gruntled, Sheveled, Whelmed.

15 thoughts on “Not Remotely Amusing: The Broken Car Remote”