You are here: Home / Fix It / Musty Odor in a Home

Dear Home Ec 101,
Here’s my dilemma. The house is clean, but there is a fusty, musty odor, like a large dog is secretly living in our house. We have an older, small house with the kitchen being basically open to everything. Sometimes I think it is cooking odors that are being trapped in the rest of the house. We have hardwood floors with some area rugs, and currently, no pets. I don’t like to use room fresheners or Febreze products, because then it just smells like flowers and the underlying odor. Like shampooed skunk odor.
Any other helpful tips on keeping the house smelling like fresh line-dried laundry? (I know, I know..I can dream)
Signed,
Musty Muffy 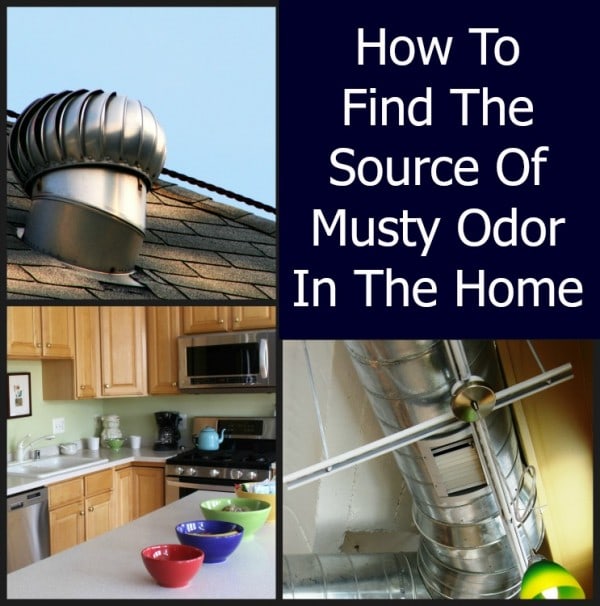 Our air conditioning stopped working on Tuesday, as I live near Charleston, SC, this would make life pretty annoying until nearly October.  While the most excellent repair guy was under the house (contact me if you are local and need a repair guy -good ones can be hard to find), he noticed there was a leak in our duct work. Not only were we air conditioning the crawl space (ack!) there was another leak causing air to be drawn in from the crawlspace in addition to the intake. We had noticed a musty odor in the master bathroom and have been running a dehumidifier constantly thinking it was due to excess moisture. The duct work has been repaired and the smell is gone. Awesomesauce.

I contacted Musty Muffy  to see if her problem could be similar. She does not live above a crawlspace and does not have central air, only heat.

Musty odors are most often attributed to mold.

It’s important to note that not all strains are dangerous and the presence of an odor is not necessarily a useful indicator of the type of mold present. There are home test kits that can be used and mailed in for identification. Make sure if you use a testing service that they are unaffiliated with a repair service.

It is important to locate the source of the odor.

Mold smells can be faint and will often only show up when the air hasn’t been circulating or when the humidity is high. The short term solution is to open the windows and turn on the fan, not the central heat, and move the air in the home. This will help disperse the odor.

Make sure none of the home’s vents are blocked.

This requires going on the roof to check. Houses must breathe.

If the home has had water damage in the past, wood is notorious for holding odors and it may be an expensive fix or something you learn to live with.

Have the roof inspected for water damage and inspect the flashing around all the windows and doors.

A leaky door or window could cause water damage behind the drywall. Other possible but not obvious locations for old water damage are near washers, dryers (the vent could leak condensation into the wall), under sinks, near the hot water heater, and around the base of showers, tubs, and toilets -a leaky wax ring could cause significant damage to the subflooring.

Another potential cause is a dried out trap under an unused sink, shower, or tub. If a sink or shower is unused for long enough the water seal in the pipe can evaporate allowing sewage gases to enter a home. This is actually a potentially dangerous scenario as sewer gases are no joke. Run some water into all rarely used fixtures from time to time.

Wash all the curtains and drapes or have them cleaned. These fabric panels are grease and odor magnets. If they have gotten damp from really high humidity after washing and drying it may be wise to lay the curtains out in the sun for a few hours (not too long sunlight can bleach some fabrics).

If you’re sure it is odors from another cause, such as cooking:

I also hate air freshener sprays, plug-ins, and discs. A deep cleaning of the cabinets in the kitchen may eliminate a lot of the funk. Grease particles float the air, land on solid surfaces and go rancid. Typically that smell is more like a restaurant first thing in the morning. (If you’ve ever worked in food service, you know the smell of trapped kitchen grease).

Two final funk sources are, a potato that escaped the bag and rolled somewhere. A rotten potato can create an unholy odor and often draws flies. And last but not least is the dreaded dead animal in the walls or attic. If it’s inaccessible time is the only cure.