You are here: Home / Fix It / Hurricane Matthew – What We Learned

I hope everyone is doing as well or better than can be expected. Last week, starting on Tuesday, it became readily apparent that Hurricane Matthew was coming for a visit. It was Thursday before we had a good idea of the type of visit he’d be paying.

We spent the week debating whether to go or stay and ultimately we decided to stay based on a few factors:

For a little while I was unsure of whether staying during the evacuation was legal or not. I grew up here and remember Hurricane Hugo and its aftermath. I also remember the mandatory evacuation orders for those on the barrier islands. They no longer use the term mandatory. We read the order issued by the government carefully before coming to our final (but willing to change if the situation warranted it) decision.

I firmly believe, despite what the media will say, that our governor handled this situation well. I believe calling for the evacuation well ahead of the storm was the right thing to do. For the most part, people were able to leave the area with minimal hassle.

Due to all of the factors I mentioned above, weathering the storm itself wasn’t that bad. For us, the worst of it was wondering if we had made the right choice, I am a worrier, it’s my nature.

Our home had only very minor (a few shingles) damage and we are still dealing with the inconvenience of not having power. 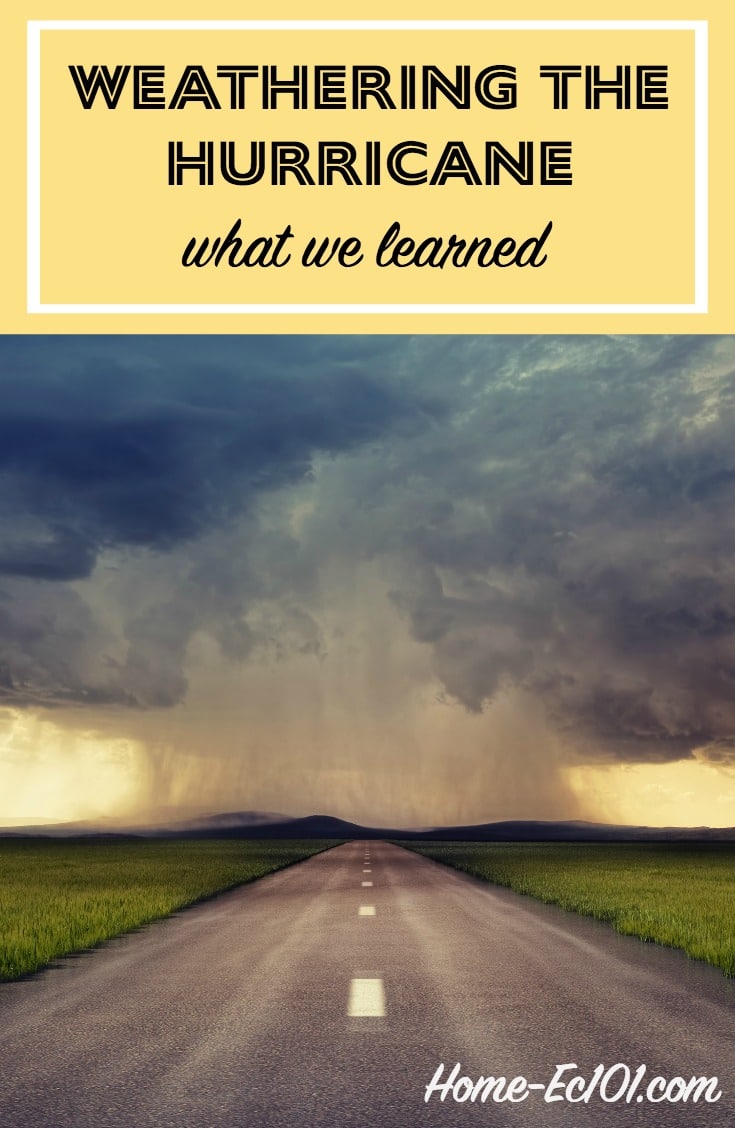 Things I will do before the next approaching storm:

The line about society being 24 hours and two square meals from anarchy isn’t really a stretch. When people are worried and anxious they may also be thoughtless. Don’t take it personally.

Have your blackout pantry in place well before Hurricane Season (or blizzard or tornado) starts. Add to it as needed and stay out of the stores and off the roads as people who don’t think ahead decide to get ready.

Be patient; be kind.

I hope everyone in the Home-Ec 101 Community is safe. I hope the storm was mostly an inconvenience and not a disaster for you. My thoughts and prayers are with those who have lost their homes and families and my heart aches for Haiti.