You are here: Home / All / How to Reduce Lint

Dear Home Ec 101,
My husband just started a new job that has him wearing dress slacks -like Dockers- and dress shirts instead of the jeans and t-shirts he’s always worn.  Even though I wash and dry them separetely (to avoid any ironing!) they still come out with quite a bit of lint on them. I clean out the dryer lint trap every time and that doesn’t seem to matter. Any suggestions on how to reduce lint on clothing?
Signed,
Lint-ridden in Linton 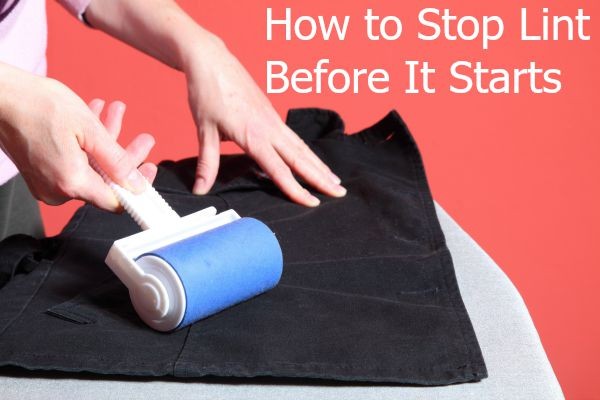 I just took a tour of the Internet before answering this email. Boy there are a lot of people out there asking, “What is lint?” and boy oh boy can the Internet be full of interesting suggestions.

Let’s keep it simple, lint is the fuzz created from tiny broken and loose threads (yarn in some cases). It tends to build up in washers and dryers. Lint is not dust mites, looking at you wiki.answers -that one just hurt to read.

First of all, new clothes are often quite linty. Why? The broken and snipped threads created during manufacturing are shed during the first few washes.

You can reduce the creation of new broken threads by drying your clothing minimally. Remove the clothes from the washer, shake them out of the twisted ball that some washers like to create, and toss into the dryer. Dry just until the wrinkles from washing disappear and hang to finish drying. You still won’t have to iron, the clothing will produce less lint, and as a nice little bonus, they will also last longer.

If you have one, use a clothesline and eliminate using a clothes dryer altogether.

Along the same line as not over-drying is don’t wash your clothing too often. Not only does this tip reduce wear on clothing, it also reduces your energy bill and overall environmental impact. Americans, as a whole, tend to wash their clothes more often than necessary.

Pants and outer shirts can certainly be worn more than once, provided:

a) you wear underwear (don’t tell me otherwise, just wash the pants, please),
b) undershirts and/or a good antiperspirant are used, and
c) there hasn’t been anything spilled.

Hang clothing after wearing to allow it to air out. Obviously there are times of the year when sweat is more of an issue and some people are just heavy sweaters and can’t get away with a second wear. Use your common sense and your nose, I suggest this on behalf of everyone you interact with, to help make that decision.

Before you wash your next load of hopefully lint-free clothing, take a peek inside the tub of your washing machine. You may need a flashlight to do this. If the machine itself is full of lint or hair, it’s time to clean out the machine. Wipe out what you can with a towel (and shake it before throwing it back in the washer) or use a paper towel and run an empty cycle on hot with detergent and vinegar OR chlorine bleach. Not gallons of bleach either, just a cup in a standard top-loader and 1/2 cup or less in a high efficiency model. This should be done a few times a year.

If you have a new, high efficiency washing machine, wipe out the rubber gasket that lets the door seal tightly. This is a major lint, hair, and other funk trap. If this isn’t done, lint from one load can transfer to the next.

Finally, all over the Internet I see people suggesting that a 1/2 cup of vinegar in the rinse cycle will rid your life of lint problems. Eh, it’s a your mileage may vary tip it can improve the solubility of the detergent and may help wash away the sticky detergent residue. Without the residue lint won’t stick as much to clothing. Will it be life changing? Not unless you habitually use too much detergent.

Send your questions to helpme@home-ec101.com