Whether you’re doing a canning marathon or just making dinner, knowing how to peel a tomato will eventually come in handy. I’m going to show you two ways to peel tomatoes. One method is for when you just need one or two without a lot of hassle, and the other is great if you need several (or tons of) peeled tomatoes.

One of the first times I helped my mother-in-law in the kitchen, prepping the fixins for a cookout, she started doing one of the weirdest things I’d ever seen – peeling the tomatoes before slicing them for the burgers. Really? Growing up, we’d only peeled tomatoes for canning, and THAT was only if couldn’t figure a way around it. Apparently, my mother-in-law ALWAYS peeled tomatoes for sandwiches and salads because that’s the way she learned it, and she seemed surprised we never had done that in my family. And? She stopped doing it, too. (Although she would still remove the skins when it was for her mom, as they seemed to bother her.)

If you’re adding fresh tomatoes to a dish with a long cooking time, removing the skins from the equation may result in a more pleasant dining experience for all. How so? Well, have you ever had a bit of tomato skin stuck at the back of your tongue, where you can’t quite swallow it and you can’t get it to budge without looking like your parents taught you no manners? There ya go.

Rule of thumb: if the recipe calls for throwing the tomatoes in near the end and only cooking long enough to heat them, you may choose to leave the skins on. You should peel the tomatoes first if they’re going to be cooked long enough to set the skins free to wander about in your entree   because you care about your family’s dining experience.

Bring a pot of water to a simmer – not quite boiling. While that’s heating up, get a large bowl and fill it with cold water. Toss in a couple ice cubes if you like. We’re blanching, friends. I’ve seen, and used, instructions that say to use BOILING water – but I tend to end up with mushy, partially tomatoes that way, so I go with the simmering water. It works and I get nicely peeled tomatoes that really haven’t cooked, and so this is  especially nice for anywhere you want peeled, raw tomatoes. 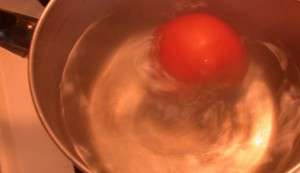 Drop your washed tomatoes into the pot. You want to be able to get them back out quickly, so don’t put in a lot at one time (more on that later.)

Leave them in the water for 20 seconds. You can use a timer, or use the method I learned from our neighbor, “Grandma” Slosser, when I was very small. Count out loud, saying Mississippi in between the numbers. This gives a fair approximation and I’ve used it all my life. (Stop looking at me like that.)

Using a slotted spoon, quickly remove the tomatoes to the cold water bath and leave them for at least a few minutes – until you can handle them, or until they’re cold if you’d rather.

Using a sharp paring knife, cut out the core. All of the core. This may require more digging into the flesh in some varieties than in others. 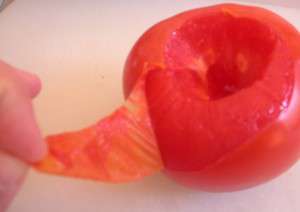 Now, starting around where you cut the core out, grab the skin and pull it off. It may tear, but it should come off easily. If not, you need to leave the tomatoes in the hot water bath slightly longer next time.

If you’re canning or otherwise need TONS of peeled tomatoes, you may prefer an even quicker way. You can use a stockpot for the blanching IF you have access to a wire basket for the tomatoes to ride in. If you try to blanch a stockpot full of tomatoes but you’re only removing them one at a time with a slotted spoon, some of them are going to be in the hot water way too long and end up mushy. Just a factor to consider. If you’re doing it this way, use your (THOROUGHLY CLEANED) kitchen sink for the cold bath.

No hot water needed – this is the way my mother-in-law was peeling those tomatoes I mentioned earlier, so I learned this technique from her.

You’ll want a paring knife for this – do not use a serrated knife, just a nice, sharp paring knife. With the (already washed) tomato in your non-knife-holding hand, scrape the sharp edge of the knife blade over the entire tomato, while holding the knife blade perpendicular to the surface. 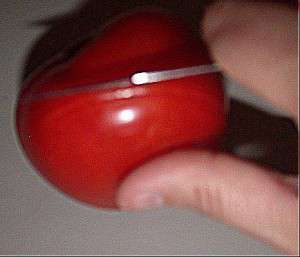 As you’re doing this, you should feel the skin loosen a bit. Once you’ve loosened all the skin in this way, cut out the tomato core. Starting where you just removed the core, slip the knife blade under the skin, then use your thumb and the knife to hold onto the skin, slowly pull it away from the flesh. You’re not actually cutting with the knife, just using it to help you hold onto the skin. Some folks may find it easier to just use your fingers. This technique lends itself to small-scale tomato peeling because, while scraping the tomato all over is slightly labor-intensive, all you have to wash up is one knife, and it requires no heating of water – thereby saving energy and money. Yay.

Bobbie Laughman is an elder caregiver and freelance writer in Gettysburg. You can contact her at bobbie@home-ec101.com.  It’s okay, she doesn’t bite. Much.

3 thoughts on “How to Peel Tomatoes – 2 Easy Methods”