Drop dumplings are easy to make and a great technique to keep in your toolkit. Nothing says comfort food like chicken and dumplings.

When I first launched this site, I included this recipe for chicken noodle soup. I use the same technique, using homemade chicken stock when I have it for my chicken and dumplings. The dumplings are ridiculously easy. Before making the dumplings, bring the soup to a boil, you don’t want the dough sitting around, waiting for the soup to get hot enough.

The dumplings won’t be as fluffy if the baking powder gets used up while the batter sits waiting for its swim in the soup.

Then quickly stir together the following recipe.

If you want to make a big batch of dumplings, just double, triple, or whatever you need based on this ratio. 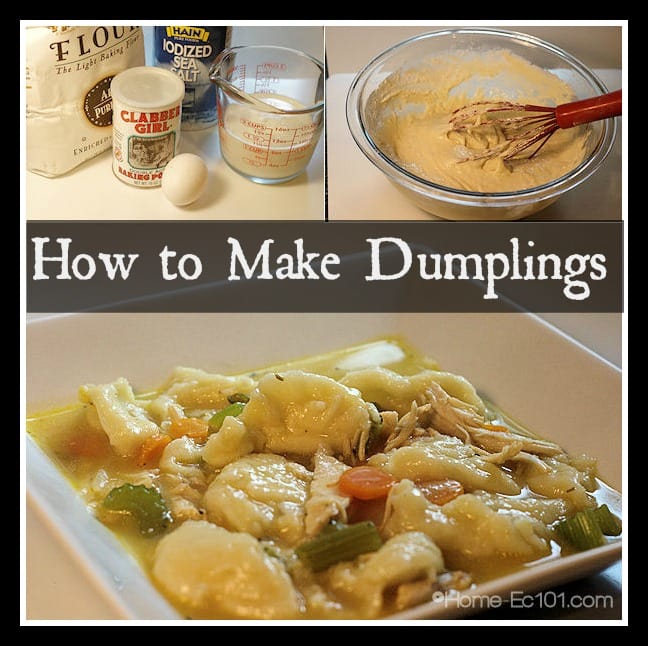 Hold your horses, Heather, you didn’t say how much flour. Well, it all depends on your humidity level. But how much, Heather?

Stir in 1/4 cup of flour, combined with the 1 tsp baking powder at a time until the batter is a little thicker than cake batter. If you drop your first dumpling into the broth and it falls apart, add another 1/4 cup of flour , 1/4 tsp salt, and 1 tsp of baking powder because your mixture is too runny. (Don’t worry, your fallen apart dumpling won’t hurt your finished dish one bit)

Plop by teaspoonful into the broth, which should be boiling vigorously.

Once all of the dumplings have been made, reduce the heat to low, cover, and allow to simmer for 15 minutes. Some of my friends, like to add a splash of milk to the broth just before serving. Sometimes I like that, sometimes I just leave it as is.

24 thoughts on “How to Make Drop Dumplings”