I’m not a fan of summer; it’s hot, sticky, and—for someone as pale as I—sunburny.  I spend most of the summer indoors, hoping for a cloudy day.  For reasons probably related to my aversion to summer, I long ago decided that August is, in fact, autumn.  And what does autumn mean?  Soup, of course!  Every year, I spend my late summer early autumn days making and consuming vats of soup.  In the first week of my imagined autumn, I have already jumped into preparing my favorite soup: French onion.

I know that most folks consider French onion soup to be a red and white can classic, but it really is so much more.  It is a simple but classic, decadent but inexpensive, fancy yet homey French entrée dating back to the 1700s.  (More recently, it was featured in Julia Child’s Mastering the Art of French Cooking.) A must have for many restaurants, this timeless soup can be made at home with little more than beef broth, onions, cheese, and bread.  Why not give it a shot next time you’re craving soup (or croûte/little toasts)?  It’s “fall”, after all.] 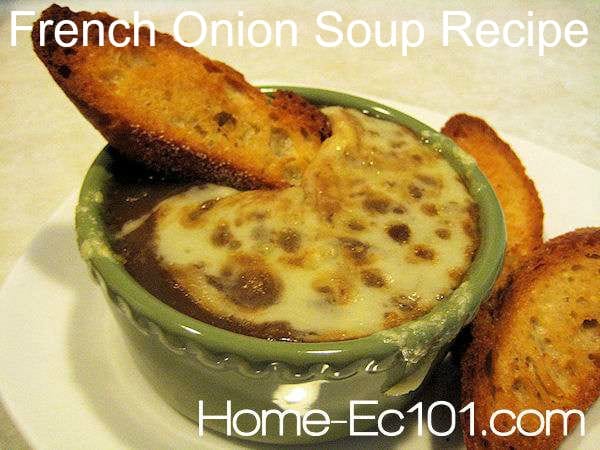 Michele Newell is a housewife turned blogger turned Home Ec 101 contributor.  You can read her near daily ramblings at Dreams Unreal.

If you liked this recipe here are some more soup recipes you can try.