I thought that this weekend’s event would be a fun way to give back. I thought I would fly home Sunday evening and dive back into normal life. I thought that Thursday’s Quick Note would be the only thing I would say here. I didn’t realize how profoundly a small deed like preparing a meal as an act of gratitude would affect me.

I grew up a military brat; I knew military life. However I was lucky, my dad served mostly during the Cold War. He went out and always came home whole and safe.

Those I met this weekend were not so lucky. Many of those I met this weekend gave up their limbs and a normal life so we could continue to live as we do. The families I met at the Fisher House (it’s like the Ronald McDonald House for military families) were painfully young. So many of these soldiers are just so terrifyingly young, newly married with brand new families and now futures a world apart from the one they planned.

I don’t have any pictures of the men and women I met, to share those would be to compromise their dignity and that is something I will not do. What I do have are pictures of the team that came together, from all over this country, to work together and prepare a few meals. I cannot begin to convey how much I admire and respect these people.

I wish I had thought to take pictures of all of the regular volunteers at the Warrior Family Support Center. Wounded soldiers are often assigned to a transition battalion and during this time their job is to get well. Their job is physical rehabilitation and they are stationed at places like Ft. Sam Houston and BAMC (Brooke Army Medical Center). The building (if you go through the above link, there are pictures) is intended to be a home-like environment, a place unlike sterile hospital and therapy rooms.

The facility is beautiful. Don’t ask about the butterfly theme unless you have tissues within reach. I’m not usually a crier, but I spent a lot of time staring at the ceiling and blinking back tears.

Volunteers like Rachel cannot be thanked enough. I wish I had thought to take pictures of all we met. 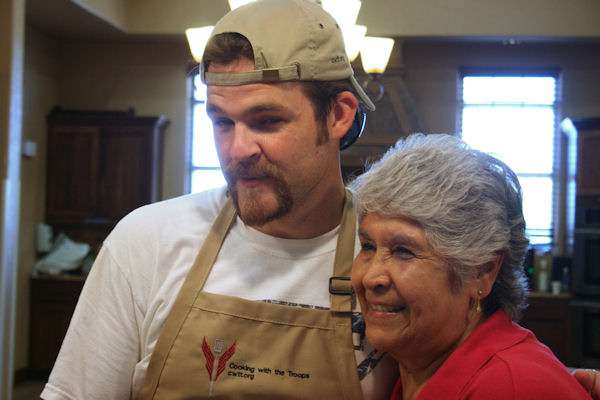 Val Prieto of Babalu Blog and Dos Cubano Pig Roasts roasted four pigs in La Caja China -boxes specially designed for pig roasting. As an aside, I spent four days immersed in Spanish, cursing every moment I wasted on French in high school.

I wish you all could meet Marta and her wonderful family. I will teasingly mention that if you’re an introvert you may find sharing a car with them a tad overwhelming at times. Carrie Ferguson Weir, a mutual friend, had sent me a message to be on the lookout for Marta “She’s a Cuban you, you’ll love her.”

Meet Marta, whose heart is many times larger than the tray of 300 Marta’s Pastelitos de Guayaba.

The following picture isn’t the best from a technical perspective, but I find it captures the environment better than any other I took over the weekend.

I want to introduce you to Ellen Adams of Red Hot Dish. She’s a personal chef in Webster, NY. We bonded as foodies and as fellow red heads. She’s an amazing woman and I wish you could spend time with her. Not only did she create the menu and prepare dinner on Friday, she also taught the first Home Front Support cooking class, which was a wonderful success. (This class is a huge part of why I am a part of Cooking With the Troops)

If you needed proof I did more than stand around and take pics, rest assured I would have many more if I hadn’t been neck deep in prep work,  pot scrubbing and epicly -yes made up term- large batch of couscous making.

I want to mention Mike Russo who had a joke for every lull in the conversation and in the evenings, when we cut loose, he generously served as designated driver.

I’m scared if I tried to describe him to you, I wouldn’t do him justice and it would leave you with a caricature of who he is. He’s one of the outstanding men behind Cooking With the Troops and it was an honor to work with him. Blake Powers, CEO of Cooking With the Troops, worked tirelessly to bring this project to fruition. I can’t thank him enough and ridiculous as it may be, I don’t have a good picture of him, either.

I’m still processing the experience. I don’t have the right words to explain how tough it was to be told “Thank you,” when really, “thank you” was why I was there in the first place. The experience was so incredibly rewarding that there is no way it can even begin to be an expression of the gratitude I feel for those who we were trying to serve.

It will never be enough.

Thank you, Home Ec 101 Readers for being here. If it weren’t for you, I never would have had the opportunity to be involved in this project. This won’t be the last time I work with CWtT.org and I am deeply indebted to you for the privilege.

21 thoughts on “Cooking With the Troops Recap”