If you live in the U.S., green beans are probably still “in season” for a little while, so you’ve still time to try Butter Toasted Walnut Green Beans – a savory side with a couple unexpected ingredients. Things to like: short ingredient list, simple prep and short cooking time. Things to love: Butter Toasted Walnut Green Beans tastes like it took way more effort than it really does. 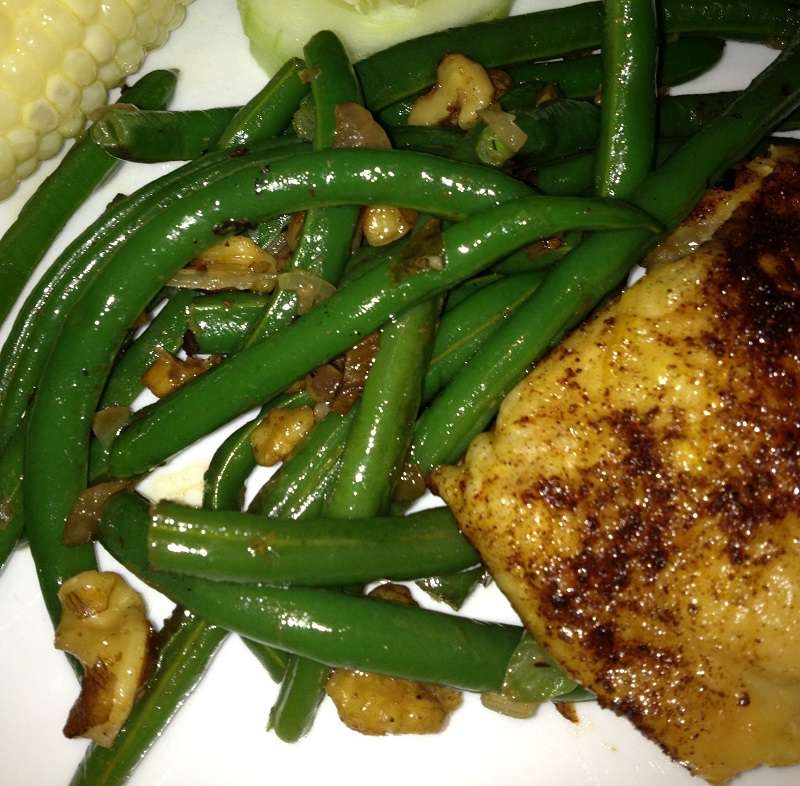 My teenage self would never believe I’m writing about this. Other than babysitting, my first job was on a green bean farm. Sure, they grew other stuff. But seriously, it was mostly beans. Beans, beans, beans. All summer long. But we didn’t pick the beans. They were mechanically picked, and hauled to the barn and dumped into a contraption the owner’s son built to sort out most of the stems and rocks and teeny-tiny beans. Anything that made it through was dumped onto a conveyor belt manned by a handful of kids (can you still say “manned” if they’re teens? And mostly girls?) whose starting pay was $1 an hour, and whose only job was to pick out anything that wasn’t a nice, pretty-looking green bean before it went into the crates at the end. And not to get hypnotized by the conveyor belt going past oh, so steadily, because then you’d fall over. (Or maybe that was just me….) And we’d listen to the radio and sing along to the Bee Gee’s Bald-headed Woman.**

A few weeks into that job, I’d given up on trying to grow long fingernails (stupid conveyor belt) and also I never wanted to see another green bean. In. My. Life. By the time I’d worked there three summers (and late springs, and early falls) if anyone had told me one day you will go out of your way to buy fresh green beans, I would have told them they were nuts.

And speaking of nuts (see my subtle segue?) – they’re a major player in today’s recipe: Butter Toasted Walnut Green Beans. Most people have had, or at least heard of, Green Beans with Toasted Almonds, which may be called Almondine or Amandine, depending on where you live and the circles you move in. Quite tasty, but been there, ate that, and most likely dribbled it on my t-shirt.

Well, this one’s a bit different, with butter toasted walnuts (obviously) but also a couple “secret ingredients” that you might not expect. Dry vermouth and…vanilla. Just a touch of each, combined with butter, garlic and onions, makes a sauce that belies the tiny amount of time and effort to make it. It tastes gourmet without much effort.

If you don’t have dry vermouth, you can use a dry white wine. Do not use sweet vermouth or other sweet wine, because sweet won’t work here.

Oh, and the vanilla! If you’re one of those who’ve always thought vanilla meant plain or boring, then you need to try vanilla extract in this non-sweet dish.  It enhances the other flavors in a decidedly non-vanilla way. Be sure you use real vanilla extract rather than imitation.

Make ahead: The nuts can be toasted and the sauce made earlier in your meal prep, but it’s best to cook the beans right before serving, so as to avoid overcooked beans, or you can serve them at room temperature if they’ve cooled down, rather than reheating them. I know any time I try to hold beans at serving temperature for a while, or when I reheat them, they taste overcooked. I can’t be the only one who hates mushy beans.

Add beans to a saucepan of already boiling water. Reduce heat, cover and simmer for about 10 minutes or until crisp-tender. They should be still be bright green when they’re done. 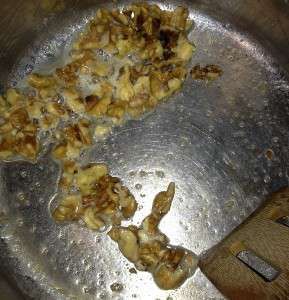 While the beans cook, prepare the nuts and sauce. 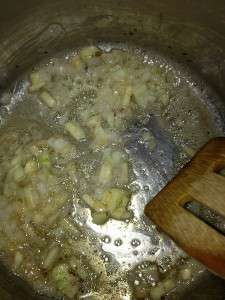 Melt remaining butter, then add onion and stir for one minute.

Add garlic, vermouth, vanilla, garlic, salt & pepper. Let it come to a boil and cook for a minute or two. Remove from burner, but keep warm.
When beans are done to your liking, drain, then return to pan. 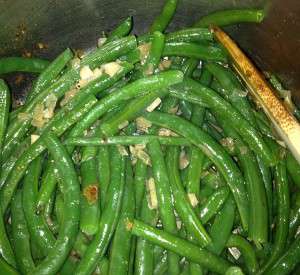 Pour the sauce over and stir to coat well.

Transfer to pre-warmed serving dish, then sprinkle walnuts over top. Serve immediately.
This same sauce would also go wonderfully on roasted green beans. Those may take just a bit longer to cook, so plan accordingly. Toss with the sauce after roasting the beans.

Frozen green beans can be used out of season, but do try Butter Toasted Walnut Green Beans with fresh, in-season beans while you can!

** I swear I am not making this up. One of my co-workers at the green bean farm, a girl who shall not be named, absolutely  believed the Bee Gees were singing bald-headed woman instead of more than a woman. We learned this the first time the song came on, and she started singing the wrong words. Unironically, because nothing was ironic in the 70s. And when we tried to tell her the real lyrics, she argued with us about it, convinced she was right, and she was not the kind of person to try and put one over on us. So now, over 35 years later, I always sing Bald-Headed Woman quietly to myself as I wash and trim the green beans.

Bobbie Laughman is a dabbler in this, that, and the other thing. She is blessed to be Gwamma to EB: a half three-year old girl, half fierce tiger, and half genius philosopher, who currently lives 2 miles away and visits frequently.
Bobbie lives in the Gettysburg PA area, with her husband who has known her since 1981 and loves her anyway.